The Binding of Isaac Wiki
Register
Don't have an account?
Sign In
Advertisement
in: Minibosses, Deadly Sins, Bosses

Any with the following:
Mini-Boss Room
Wrath (ラース, Rāsu) is one of the Seven Deadly Sins. He is a figure with pale skin and hollow eyes, wearing a gray suit.

Wrath attacks the player by shooting bombs, similar to the way Isaac fires bombs with Dr. Fetus. These bombs can damage Wrath, and can be pushed back by Isaac's tears or by simply running into them.

Wrath tends to have a very independent movement pattern, similar to Larry Jr. where he appears to move in a pattern that is not dependent upon where the player is.

His only attack of throwing bombs can be very damaging, but is easy to avoid. The simple strategy is to be attentive. As Wrath rarely will move aggressively towards the player, most of the attention should be paid to the arrangement of the room. However, when Wrath does touch the player, he deals 1 heart of damage.

As long as the player does not back into a corner and always has a line of escape, Wrath proves to be an easy adversary. Be cautious about the eventual troll bombs he can drop when he dies. If Isaac fire tears at the bombs, they will move in the direction they are pushed and can deal damage to him if he is in the blast radius of them.

However, once in The Womb or Sheol, fighting multiple Wraths can be significantly more challenging. It is advisable that the player uses their own bombs to clear out the room, so that there are always multiple avenues of escape if cornered.

Wrath drops a few bomb pickups on death, and may drop Mr. Boom as well.

Eternal Wrath acts similarly to its normal variant, but can shoot up to 4 bombs every time. 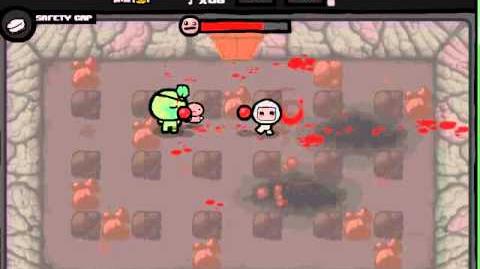 The Binding of Isaac - Wrath 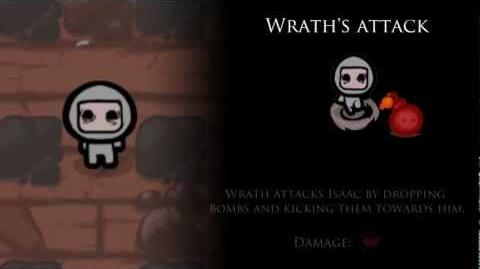