War (ウォア, Woa) is one of the Four Horsemen of the Apocalypse, a boss which can be encountered at the end of the first floor in The Depths or Necropolis instead of a traditional boss once the player has beaten the game for the first time (killed Mom). War appears as a red, humanoid-like being in a state of permanent rage with a pair of large, beady eyes riding on a stick horse. Unlike the other horsemen, War's stick horse appears to be a bull instead of a horse. 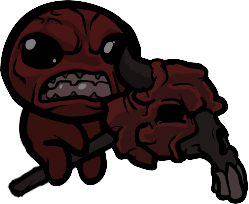 During phase 1, he leaves a Troll Bomb behind his path whenever he charges through the screen, and he will more frequently charge than regular War. He jumps off less often, but when he does, he summons 2 Mega Troll Bombs instead of half a dozen normal Troll Bombs.

During Phase 2, he normally chases you around the room, but when he is stunned, he fires out 6 bullets in six different directions. The champion War is also slower if the player continues to attack him.

He sometimes disappears from the screen completely after a jump attack. If you aren't able to exit your current room or kill him through AoE (e.g. Necronomicon), your game will be lost. In this case, homing tears will go towards you (confirmed only in a Famine-War combinate room in The Chest).

His attacks during Phase 1 remain the same, but come with some extra abilities. He can charge through screen several times and spawns up to 5 Globins (sometimes Gazing Globins, depending on his HP and how many Globins left in the battle) while charging.

His Phase 2 now triggers at 25% HP, which is exactly the same as its black counterpart.

In rare cases, it might spawn as Eternal Conquest. 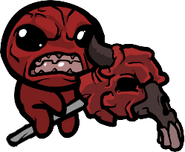 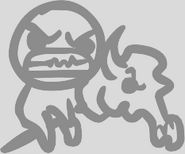 War as shown on Isaac's last will

War Alt next to a troll bomb

A glitch that causes Conquest to appear in The Depths instead of War. 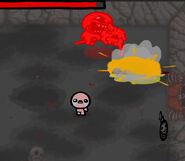 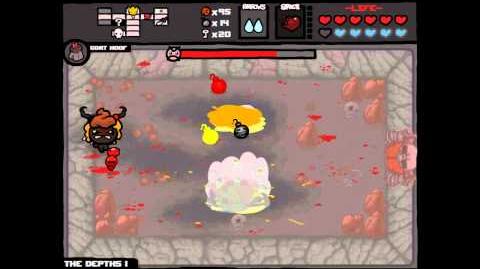 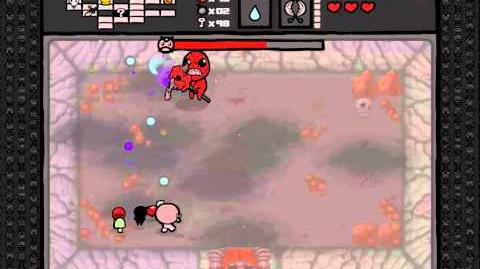