The Binding of Isaac Wiki
Register
Don't have an account?
Sign In
Advertisement
in: Wrath of the Lamb, Rebirth, Bosses, Alternative Bosses
English

Triachnid (トライアクニッド, Toraiakuniddo) (aka "Daddy Long Legs II") is an alternate version of Daddy Long Legs and is unlocked by completing the Womb and/or Utero 15 times.

He hovers in the middle of the room much like Mom's Heart and It Lives. He has four different attacks:

Its attacks are identical to Daddy Long Legs, except more white slowing creep comes from his 'feet' and using his headslam attack spews 8 diagonal shots across the room.

Unlike the other alternate unlocks (Steven, C.H.A.D. and Gish), Triachnid does not have a specific item drop.

Every stomp of Eternal Triachnid leaves a small puddle of white creep and sometimes, an additional Sack. All other attacks are same as its normal counterpart.

Menu screen after defeating Triachnid prior to 1.15.

The secret unlocked for completing the Womb multiple times.

A Triachnid battle in The Womb. 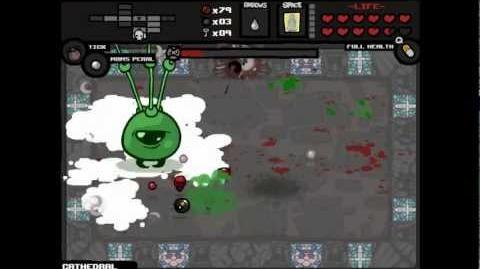