The Binding of Isaac Wiki
Register
Don't have an account?
Sign In
Advertisement
in: Wrath of the Lamb, Rebirth, Posthumous Bosses,
and 4 more
English

The Husk (ザ・ハスク, Za Hasuku) is a Wrath of the Lamb boss found in the Catacombs. He is the posthumous version of The Duke of Flies.

This boss moves at a much faster rate than the Duke of Flies. He mainly uses the spawning of Flies, like the original Duke of Flies, as well as that of Spiders to attack. He also spits out blood projectiles, one similar to Monstro's cough attack (though with fewer projectiles), and the other similar to Loki's 8-way blood shot. Like his predecessor, the Husk has comparably little health and can go down within a few seconds. Also, his attacks are random, so these are a few warning signs that should be looked out for:

The Spiders are more threatening than the Flies, so they should be taken out first. If you remember these signs, you will escape with little to no harm. Remember - patience is the key 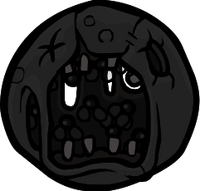 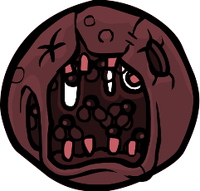 Roughly half as big (picture here is not actual size) and moves at double speed. Does not spawn enemies at all, but fires bullets constantly in 8 directions. When killed, leaves several flies and two Red Boom Flies. The shape of this champion also seems to be vertically stretched.

Eternal Husk is slightly bigger than normal Husk. It remains the ability to use Monstro's attack and 8-way-bullet attack, but spawns more Attack Flies (sometimes even Spiders). There're also 3 pairs of Eternal Flies (6 in total) surrounding it, acting as its shield. Upon death, it spawns much more Attack Flies and a few Fat Flies.