The Binding of Isaac Wiki
Register
Don't have an account?
Sign In
Advertisement
in: Wrath of the Lamb, Rebirth, Afterbirth,
and 6 more
English

The Hollow (ザー・ホロー, Zā Horō) is the posthumous version of the boss Larry Jr. that spawns in the Catacombs.

It consists of two enemies - one with 4 segments and one with 5; each flies diagonally across the screen.

The movement of the boss resembles that of Fistula, though each segment can change the angle at which it bounces around the room, making dodging more difficult. The segments can be damaged and destroyed individually like with Larry Jr., which causes piercing tears to be very effective against him. If the room is filled with rocks, players may find themselves having a hard time dodging the Hollow, as the rocks will block player's movement (unless the player can fly), while the Hollow can fly over them.

Like with Larry Jr, each of the Hollow's segments are destroyed separately, therefore using The Necronomicon will instantly kill the Hollow.

The Hollow has a higher chance of appearing if you've killed Larry Jr before.

Each segment drops a coin when destroyed. Being hit by this variant of The Hollow will cause Isaac to drop coins.

Each segment spawns a Boom Fly when destroyed.

Shoots a row of three bullets as an additional attack. Each segment spawns a Charger when destroyed.

This variant of the Hollow moves in a slightly altered pattern. It bounces off walls as usual, but also tries to chase Isaac by curving toward him. Each segment spawns a random amount of Attack Flies, Pooters or Fat Flies when destroyed. Much like Eternal Larry Jr, if its head is the only segment, it will move at 1/2 of its original speed and leave creep on its trail, though it will directly pursue Isaac rather than wandering around the room. It will not gain new segments. 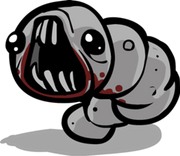 Gray champion version of The Hollow.

Green champion version of The Hollow

Gold champion version of The Hollow.