The Gate (ザ・ゲート, Za Gēto) is a new stationary boss seen in The Binding of Isaac: Rebirth. It seems to be the posthumous version of Mega Maw.

The Gate resembles a huge skull with large, glowing red eyes, bloody tears, a big crack from his forehead where his third eye should be.

The Gate will typically cycle through these three attack patterns randomly:

If there are two or more leapers on screen, The Gate may fire a brimstone laser which will have a trajectory equal to the position of the remaining leapers, ending in the bottom center of the room. This attack will also kill the leapers.

When fighting The Gate, it should be noted that there may be 4 fires in each corner of the room. Clearing these should prove to be beneficial, as it clears up more room for dodging attacks. Killing the leapers quickly is also recommended, as this prevents The Gate from firing a homing brimstone.

Having The Ludovico Technique makes this fight a simple one, due to The Gate being stationary boss, you can deal continuous damage while also killing the spawned leapers fairly quickly.

This variant spawns Big Spiders instead of Leapers, occasionally spawns Spiders. It does not use the brimstone attack.

This variant uses a completely different set of attacks:

Note that all of his blood shots deal 1 full heart damage. 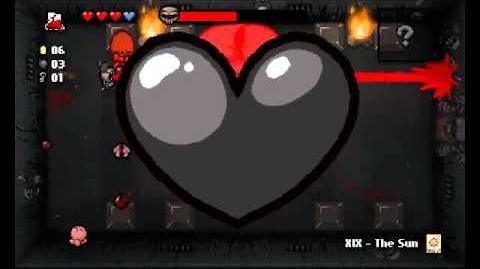 The Binding of Isaac Rebirth *The Gate Boss Battle*
Retrieved from "https://bindingofisaac.fandom.com/wiki/The_Gate?oldid=131319"
Community content is available under CC-BY-SA unless otherwise noted.