Any collectible found in a Devil Room

The Caves, The Catacombs

The Fallen is a rare boss added in the Halloween Update. He looks like a regular demon, with shiny red eyes, horns, black wings, and an upside-down cross (Cross of St. Peter) on his forehead. His body ends with a nubby tail section.

The Fallen has two phases and three attacks.

The first consists of him chasing after Isaac at high speed. He will stop after taking enough damage and unleash his second attack, launching 4 blood beams (similar to Brimstone) in cardinal cross directions.

For his last attack, he'll spit two salvos of bullets, one with 3 and the other with 4. When his HP reaches 50%, he will enter his second phase, splitting into two smaller Fallens, each with the same attacks as the original.

The Fallen may appear intimidating, but as his patterns are very predictable; he can be killed with relative ease. The projectile waves that he shoots can be dodged easily by weaving in between the bullets or just moving to the side. In phase two, when there are two smaller Fallens, it is best to kite them around the edges of the room during their charge attack.

If Isaac has The High Priestess Tarot Card it is possible to defeat the Fallen in one hit simply by using the card. Mom's foot will kill both the original Fallen and the two smaller Fallen immediately as they spawn, finishing the fight almost instantly.

In Hard Mode, the Eternal Fallen splits into three of itself at half health, with one of the Fallens appearing slightly larger than the other two. The larger one has slightly stronger firepower, the other 2 smaller ones are identical to a normal Fallen.

This variant was added in Eternal Edition.

The Fallen as seen on Isaac's Last Will. 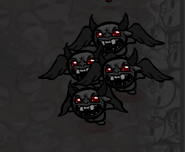 A bug creating 4 mini-fallen instead of the usual 2.

The Fallen as a normal enemy in Sheol (could be the mentioned champion).