The Duke of Flies

The Duke of Flies (デューク・オブ・フライズ, Dūku Obu Furaizu) (also known as The Duke for short from the artbook, and in The Legend of Bum-Bo) is a boss that can be encountered in the Basement and Cellar.

He is a large, circular humanoid with "punch-holes" for eyes, light-brown skin covered with multiple warts, and stubby limbs. He sports with a autopsy stitch from his chest. His mouth with crooked teeth-filled jaw is larger enough to be filled with swarm of flies.

From the original game, the Duke's is colored light-brown. However in Rebirth, his color is now periwinkle.

The Duke coughs out regular Flies and Attack Flies around him and floats around the screen in random directions, while bouncing off of walls. He takes a large amount of knockback from Isaac's tears.

The Duke coughs out regular flies for defense and will keep doing so if Isaac continue destroying them. These flies will circle around him. If he has too many flies around him, he can blow them away at high speeds, which will cause them to follow Isaac.

Once he has sufficient defensive flies, he will proceed to spawn attack flies instead, which are stronger and poised to attack the player from the start.

Upon death, he spawns a single Pooter and 2 more Attack Flies. In Rebirth, however, no longer does so.

Actually getting Isaac's shots through to The Duke of Flies is the most challenging part of this encounter, and that can be accomplished in a few main ways: 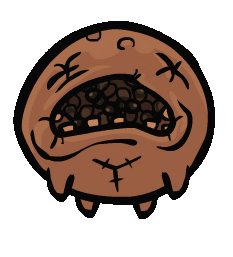 Larger and moves slower than the original Duke of Flies. Instead of spawning large Attack Flies, he spawns Suckers. 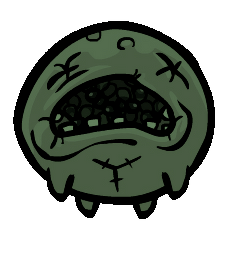 Shoots blood in all directions when he coughs, and spawns Moters instead of Attack Flies.

Is surrounded by three Eternal Flies. Upon death, he spawns far more Attack Flies and some Fat Flies.

The Duke of Flies' sprite sheet from Rebirth. 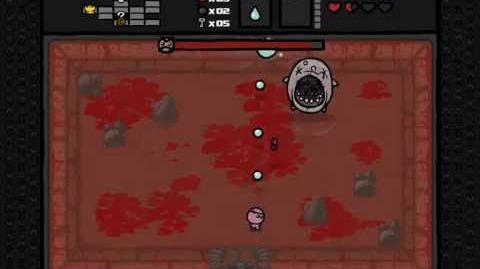 The Binding Of Isaac THE DUKE OF FLIES