The Binding of Isaac Wiki
Register
Don't have an account?
Sign In
Advertisement
in: Wrath of the Lamb, Rebirth, Posthumous Bosses,
and 4 more
English

The Bloat (ザ・ブロート, Za Burōto) is a boss added in the Wrath of the Lamb DLC. He is the posthumous version of Peep. He can be encountered in Necropolis, The Womb/Utero or as a mini-boss in The Chest.

The Bloat's attacks consist of the following: 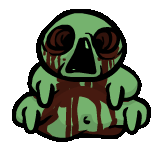 Launches 3 IPECAC bombs randomly instead of blood shots upon landing. Also spawns 2 Chargers when spawning Creep. This variant has a little less health and still fires the blood beams from his eyes.

Eternal Bloat acts exactly like the Green variant, but with some differences. All its attacks will spawn 1 eye.

Colored Bloat in the Chest 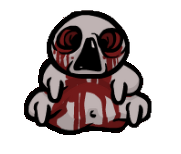