The Binding of Isaac DEMO 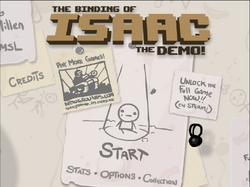 The demo is playable in Newgrounds for free which can be played from here. It requires Newgrounds Player to be installed since the discountinuation of Adobe Flash Player.