The Binding of Isaac

The Binding of Isaac is an indie game created by Edmund McMillen and Florian Himsl, with music composed by Danny Baranowsky. It was released on the digital distribution platform Steam on September 28, 2011. The player controls a nude crying child named Isaac or one of six other unlockable characters. After his mother is given a message from God commanding her son be sacrificed as proof of her faith, Isaac flees into the horror-ridden basement to stay alive.

The game can be only downloaded on Steam for $4.99 USD, with support of Microsoft Windows, Mac OS X, and Linux. On November 1, 2011, the game was included in the Humble Indie Bundle as part of the Humble Voxatron Debut.

The Binding of Isaac is a two-dimensional Action-adventure game where the player controls Isaac or six of the unlockable characters as he traverses through the dungeons located underneath his mother's basement. The video game's gameplay and style are inspired by the dungeons of The Legend of Zelda series, while mixing in randomly procedurally generated floors akin to Roguelikes (like traditional roguelikes, death is permanent and the player is forced to restart with nothing if they die) while doing this is in a simple Legend of Zelda like formula. On each floor of the basement below, the player must fight off monsters before he can go into other rooms. Along the way, the player can collect currency to buy items from shops, keys to gain entry into special treasure rooms (as well as special golden chests, libraries that contain book items, and shops), and new weapons and power-ups to increase his chance of surviving. Each floor of the dungeon ends in a boss room, where the player must defeat the boss before being able to go down to the next floor.

The Binding of Isaac's storyline is based off the eponymous Bible story. Isaac (a kid) and his mother live in a small home situated on a hill, both peacefully keeping to themselves, with Isaac drawing doodles and playing with his toys while his mother watches Christian broadcasts on the television. Isaac's mother then hears "a voice from above", stating her son is corrupted with sin and must be saved. It asks her to remove all sin from Isaac to save him. She obliges, taking away his toys, pictures, his handheld video game console and even the clothes on his back.

The voice again calls out to Isaac's mother, stating Isaac must be isolated from all the evil in the world. Once again, she follows its command and locks Isaac in his room. Finally, the voice speaks to her again. It states she has done well but says it still questions her faith and commands she must sacrifice Isaac. She obliges, grabbing a kitchen knife and goes to Isaac's room. Isaac is watching through a sizable crack in his door and starts to panic. He finds a trapdoor under the rug, and just as his mother bursts in, he opens the trapdoor and jumps down it. Isaac then puts the paper he was drawing onto his wall, which transitions into the game's title screen.

Shown throughout the game at loading points between floors is Isaac recollecting about his childhood while curled up in a fetal position and crying. These purportedly show parts of his life, showing Isaac had a difficult childhood ranging from rejection from his mother to bullying from his classmates. However, some images show impossible scenes that cannot have happened but are rather Isaac's own fears. Along with that, the game resumes with Isaac waking up on the next floor making it possible that the memories are merely made up dreams.

The game has multiple ending scenes, making the storyline distorted and non-linear as the game continues.

Main article: The Binding of Isaac: Wrath of the Lamb

A DLC expansion was added to the game, titled Wrath of the Lamb, was released through the digital distribution platform Steam on May 28, 2012. The expansion adds 70% more content to the vanilla version, and contains +25 new bosses, +100 new items, +30 unlockable content, a new final ending and more.

A DLC expansion was added to Steam on May 2, 2015 titled Wrath of the Lamb: Eternal Edition, for free for all owners of the Wrath of the Lamb expansion. The expansion adds a new Hard Mode difficulty which contained Eternal Variants of bosses and monsters, as well as bug fixes and optimizations.

In Germany, the game has received an age 16+ rating because of the potentially blasphemous content.

Due to its global success, the game spawned a small series.

First announced on August 2013, the game received a complete remake titled The Binding of Isaac: Rebirth and was released on November 4, 2014. The following DLCs for Rebirth were released: Afterbirth was released on October 30, 2015, Afterbirth † on January 3, 2017, and Repentance on March 31, 2021.

A prequel spin-off, The Legend of Bum-bo, was released on March 2020.

A card game based on the series has yet to be released, titled The Binding of Isaac: Four Souls. 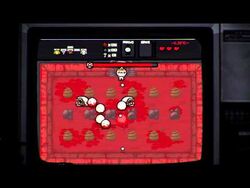