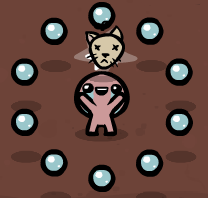 Upon activation, Isaac will raise Tammy's head in the air, and it will fire 10 large tears in a circle around him, damaging enemies within range.