Mini-Boss Room
Super Wrath is a randomly encountered super version of Wrath, one of the Seven Deadly Sins. He is added in the Wrath of the Lamb DLC.

Super Wrath can easily be distinguished from the normal version of Wrath by his increased size and the damage to his helmet, as well as the fact that the skin has been blown or burned off his face. He also has a mouth, unlike normal Wrath, presumably screaming in anger.

He attacks similarly to the normal version of Wrath, but instead of firing a normal Bomb, he fires a Super Troll Bomb. The bombs fired may slide along the floor first before beginning to follow Isaac.

Since Super Troll bombs can fly over rocks to home in on Isaac, Super Wrath can easily trap the player between Rocks and deal lots of damage. Once the destructible rocks are out of the way, this boss becomes simpler to deal with, but there are still the indestructible rocks that can block Isaac. Having Flight is a very effective way to deal with the rocks, practically turning this boss into a simpler version of Super Pride. 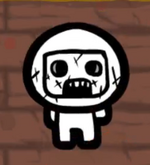 This variant was added in the Eternal Edition update but can be encountered exclusively in Hard Mode.

Super Wrath battle in The Depths 1.

Wrath and Super Wrath in the same room

Found 2 super wrath in the same room for my first time in the chest.