Mini-Boss Room
Super Sloth is a randomly encountered Super version of Sloth, one of the Seven Deadly Sins. Added in the Wrath of the Lamb expansion, Super Sloth can be distinguished from his normal Sloth counterpart by his single open eye.

With the dual IPECAC poison bomb attack, this boss can dish out damage easily if not properly dodged. His spawned spiders will try to distract you from doing so. Also, you need to be very careful when he spawns them, as they come out very quickly. It is best to ignore them most of the time since Super Sloth will often kill them with his projectiles.

He can usually drop items such as Bob's Curse, or Tarot Cards. 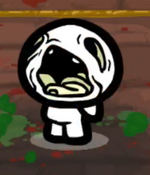