Super Lust is a more disfigured counterpart of Lust and one of the Seven Super Deadly Sins. She was added in the Wrath of the Lamb DLC.

Super Lust's main attack is to chase the player, much faster than the normal Lust. She also leaves behind a trail of creep that damages the player when touched (similar to that of a Brain). Her movement can also erratically change, which is especially deadly in a room without obstacles, since she will at times sprint extremely fast towards a random direction, bouncing off walls rapidly (not necessarily towards the player).

Since she is extremely fast, she can easily swarm the player and leave him/her completely unable to escape. Having a speed-up is essential because of this, or at least well placed bombs to block her path. One must also worry about the damaging blood trail she leaves behind. Running around in a large circle whilst avoiding her is the best way to avoid the blood trail; flight is also very handy here. She becomes significantly less dangerous the farther the player is in the game, as they most likely will have gained several speed stat upgrades.

Super Lust can drop some normal hearts as well as the Yum Heart item. 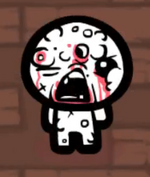 Eternal Super Lust's acts exactly like her original counterpart, but she spawns Attack Flies while still pursuing Isaac. She is also able to destroy rocks by running into them. On death, she always turns into a larger Eternal Maw and a buffed Eternal Gusher which moves at her speed.

This variant was added in the Eternal Edition update but can be exclusively encountered in Hard Mode.