The Binding of Isaac Wiki
Register
Don't have an account?
Sign In
Advertisement
in: Bosses, Minibosses, Deadly Sins

Sloth, also known as Bob, is one of the Seven Deadly Sins. He is a dark green Globin with a slightly different colored head.

Sloth's main attack is firing IPECAC shots. Sloth can also spawn Chargers. However, he can only spawn 3 Chargers on the screen at once. If one is killed, he may spawn another, but the number of Chargers that can be alive at once is 3.

He is similar to Pestilence in that he spawns Chargers and shoots green bombs.

Sloth is one of the harder minibosses, with his ability to punish minor errors quite seriously. His IPECAC shots do one whole heart of damage without The Wafer. The most important strategy to use while fighting Sloth is to keep moving in a specific direction. Doubling back and forth can avoid the Chargers, but can often lead to the player getting hit by his IPECAC shots. The best strategy is to use his IPECAC shots' explosiveness to the player's advantage. The explosion caused by the shots destroy Rocks and kills the Chargers that he spawns. Use these to clear the room, and establish a circular movement pattern that doesn't double back. This should cause all of his shots to miss, and present predictable moments of vulnerability, where the player can attack. 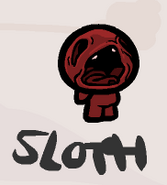 Sloth as seen in the credits

It appears to be two Sloths and no super sloth, since the "super" counterpart of Sloth have an eye, much like a gazing globin.