Scolex (スコレックス, Sukorekkusu) (also known as the Tapeworm from the artbook) is a large red tapeworm boss which can be found in The Womb. He is an older version of Pin.

Scolex's main method of attack is to pop out of the ground and jump at Isaac in an arc, and then burrowing back into the ground. He is completely immune to damage, except at the end of his red, blinking tail.

Scolex will also sometimes poke a part of his body out of the ground, exposing either his head or his tail. If it's his head, he will fire 3 IPECAC shots at Isaac and dive back into the ground. If it's his tail, he will fire multiple blood shots with varying sizes, similar to Monstro's attacks.

Scolex is hard to hit, but has the lowest health of all bosses in the game. However, if the player has Wrath of the Lamb installed, Scolex's health will be significantly buffed.

When Scolex pops out of the ground, if Isaac hit his tail, Isaac deal much more damage than when he exposes his tail and fire the blood shots.

When Eternal Scolex's head pops out, it shoots 4 IPECAC bombs that leave creep. Shooting at the invulnerable parts (head and body) will cause all tears to be reflected back. 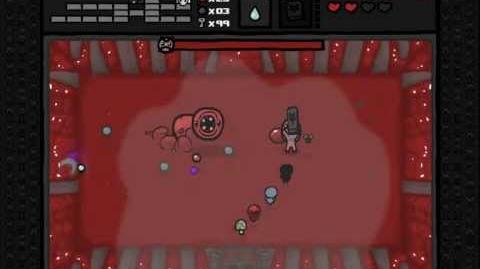 The Binding Of Isaac SCOLEX
Deutsch
Community content is available under CC-BY-SA unless otherwise noted.
Advertisement