The Binding of Isaac Wiki
Register
Don't have an account?
Sign In
Advertisement
in: Bosses, Final Bosses
English

"Devil" and "The Devil" redirect here. For the item room, see Devil Room.

Sheol
Satan is a boss of Sheol and the final boss of Ending 11. Added in the Halloween Update, he is also one of the endgame bosses of The Binding of Isaac as a whole, the other being ???.

Upon entering the Boss Room, Satan will summon The Fallen to fight the player. He behaves exactly like the The Fallen anywhere else. However, a pair of Kamikaze Leeches also appear with him in the beginning of the fight.

This phase ends when the Fallen is killed, and will proceed to Satan's 1st form even if the leeches have not been destroyed.

An easy way to dodge his blood salvos is just standing behind the Satan Statue in the middle of the room, as The Fallen cannot fire through it. Otherwise, just follow the same tactics you would usually use for the Fallen.

When planting a Bomb about 3 seconds after entering the boss room where the Fallen appears (in front of the Satan statue), it should blow up the Kamikaze Leech, greatly damaging the Fallen and taking about a quarter of his health.

After defeating The Fallen, Satan comes out of the statue in the middle of the room and attacks the player. He has three attacks: firing two salvos of blood (first 5, then 4), firing a blood beam from his mouth (if his eyes are open before the attack), and firing a blood beam from each hand (if his eyes are closed before the attack). He only performs the latter two attacks if Isaac is standing directly in front of him.

One effective method of beating him is to stand on the very far left or very far right (occasionally switching if he gets too close) and dodging his projectiles while shooting at him. Focus more on dodging than where tears go (most will hit him). Note that while he is shooting his blood tears, he is incapable of firing his blood beams, so it's best to switch sides then.

Another tactic is simply to run in semi-circles around Satan, making sure not to stand still, while firing tears. This works best with a high Speed stat. Satan will continuously try to hit you (and ideally miss) with his blood bullets as you run around him.

After draining the HP of his first form, Satan will fly off screen. He attacks solely by stomping the ground in the same fashion as Mom. He will stomp continuously with two legs faster than Mom's foot. In addition, he respawns 2 Kamikaze Leeches. By dropping any extra bombs you have while he is stomping, you can do decent damage to him and possibly chain react with the Kamikaze Leeches.

In Eternal Edition's Hard Mode, the Eternal Satan fight starts with Eternal Fallen. During his 1st phase, he acts same as his normal counterpart, but shoots faster. During his 2nd phase, the Kamikaze Leeches he summons have a chance to be their Eternal Variants. He also spawns some extra Eternal Fallens (but they are smaller and act the same as normal ones).

Satan transforming from his statue form.

Satan shooting brimstone from his hands.

Satan dying and rising back up to his second form.

Satan's foot stomping down from above in his final form. 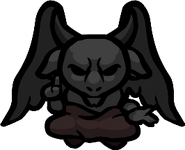 Satan as a statue. 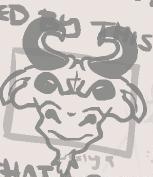 Satan in Isaac's Last Will.

The result of using The Candle on Satan's statue before The Fallen's battle is done.

Satan as seen on the Book of Belial.

Glitched Satan with Mom's Contacts and Piercing Shots. Both feet have become invincible statues and the health bar is glitched.