Pride (プライド, Puraido) is one of the Seven Deadly Sins appearing in both The Binding of Isaac and the Rebirth remake.

He appears as a sad child, similar to Isaac, with a grey body. He looks similar to a ghost.

When attacking, Pride's face changes in two different features; a Forever Alone face and the Trollface one.

In combat, he has two easy-to-spot attacks.

The first attack, forewarned by him making a "Troll" face, spawns 4 Troll Bombs in random sections of the room. He is immune to damage from his own troll bombs. The second attack, before which he makes a "Forever Alone" face, projects 4 wave-like lasers from himself in an X-pattern.

Pride may drop a Troll Bomb, Tarot Card, or the Anarchist Cookbook on death.

The best tactic is to stay to Pride's left or right, since the X-attack won't hit Isaac, and Isaac can easily go up or down to avoid the bombs. Pay attention to the order the bombs spawn, because the first ones to explode will throw the others around the room. He is also immune to his own bombs, so Isaac cannot use them to damage Pride like Isaac can with Wrath. 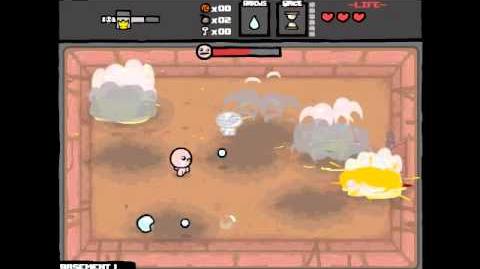 The Binding of Isaac - Pride 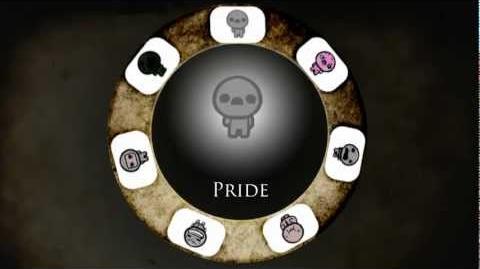 Binding of Isaac 7 Deadly Sins - Pride
Add a photo to this gallery
Retrieved from "https://bindingofisaac.fandom.com/wiki/Pride?oldid=131404"
Community content is available under CC-BY-SA unless otherwise noted.