The Caves
The Catacombs

Peep (ピープ, Pīpu) (also known as Slug Boy, Sluggy, and Pisser from the art booklet of the Unholy Edition) is a boss appearing in The Binding of Isaac and the Rebirth remake. He can be found in The Caves. Dealing with him can be difficult until Isaac get the hang of his patterns.

He appears to be an obese, dark pink-colored humanoid with a flabby body, stubby limbs, bulging round eyes, and a two front buck teeth. He constantly leaves a trail of urine.

Before Peep does an attack, he will give a signal as to what attack he's going to do.

Additionally, at 66% and 33% health, he'll detach one of his eyeballs and set it to bouncing around the room in diagonal lines. The eyeballs cannot be damaged at all until Isaac kill Peep himself, so don't waste your time shooting. They leave behind a purely cosmetic blood trail but do 1/2 heart of damage on touch normally and 1 if Isaac is fighting him in The Womb. If Isaac happen to run into Peep himself, beware that he always does a full heart of damage on touch.

The following strategies have proven to work against Peep:

During his death animation, he start "bawling" while flailing his stubby limbs side to side and then stops just before he bursts.

Both of his eyes are out right from the beginning of the fight. Otherwise, he behaves the same as the original version.

Is physically smaller and behaves like the original, but constantly leaves a urine-trail, even while in mid-air during a jump, which hurts the player if stepped on.

Peep now has 6 eyes, each eye comes out every time he loses 1/7 of his maximum HP. Note that his eyes are no longer invulnerable and can be destroyed. 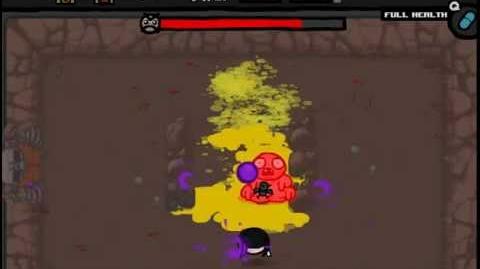 The binding of isaac boss battles eve VS peep
Deutsch
Community content is available under CC-BY-SA unless otherwise noted.
Advertisement