The Basement, The Cellar

The Caves, The Catacombs
Mulligoons are a subspecies of Mulligans encountered in Chapter 1 and 2.

The Mulligons do not harm the player on touch and attempt to avoid them, possibly running over spikes or into fire whilst doing so.

They explode into 4 projectiles in an X-pattern and drop a troll bomb on death. If they choose to explode, they do so into 6 projectiles rather than 4.

In Hard Mode, the eternal Mulligoons will periodically spawn Spiders while running away from Isaac. 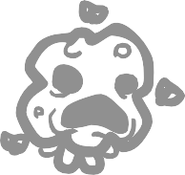 Mulligoon as shown on Last Will.