Monstro II (モンストロ.II, Monsutoro.Tū) (also known as Monstro #2 in the artbook) is a posthumous version of Monstro appearing in both the original The Binding of Isaac game and its Rebirth remake which can be encountered in the first level of The Depths. If the character has defeated Monstro in The Basement, the chance to meet him is higher. Monstro II has a chance to be replaced by Gish.

He appears as Monstro's skull, with only a portion of flesh still attached to his face. In addition to his skull, it is colored grey. His right eye look pale-colored while his left eye is completely missing.

Besides having increased HP, Monstro II differs by the following:

Having the Halo Of Flies or similar orbiting items will greatly increase survivability in this fight. Otherwise, just keep on the run to avoid the increased projectile fire.

Unlike Monstro, standing near to Monstro II will make it more likely that he will use his laser or hop towards you. This can make the fight significantly easier to manage, as he is much easier to hit when he isn't continually jumping or spawning flies.

Since Monstro II always does the huge jumps twice in a row, you can use this to your advantage - on every second launch, drop a bomb before moving. When Monstro II lands and spawns Suckers, the bomb will explode, destroying most of the Suckers and dealing significant damage to the boss himself.

An easy way to defeat him is to stand in front of him until he grins, then quickly run behind him before he triggers his blood vomit beam, then attack until he grins again. If done correctly, Monstro II will be defeated without giving him a chance to do his annoying leaps. A somewhat less risky strategy would be to get out of the way when Monstro II vomits, then quickly get back in the way when the attack ends and take a few quick shots at him until he grins again. Note that this method does not work in Rebirth due to its fixed attack pattern.

It's also possible to get him stuck against the geometry of the bottom of the room and stand in such a way that his blood beam will not hit you, but still be close enough to cause him to only use this attack. If you can stand there and attack him, he will be continuously pushed against the geometry behind and below him, holding him in this sweet spot. Great for characters with low damage or speed and need to just sit there and whack at him for a while.

Monstro II becomes twice as fast and spawns only 2 Suckers on his second jump.

Eternal Monstro II acts similarly to its original counterpart, but with a few extra buffs:

Monstro II as seen on Isaac's last will.

Monstro II in the Artbook. 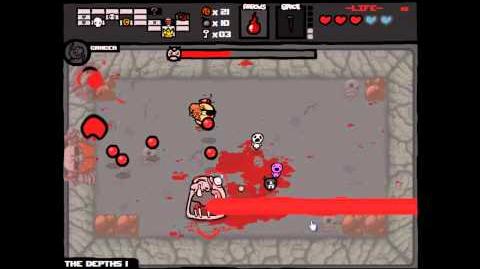 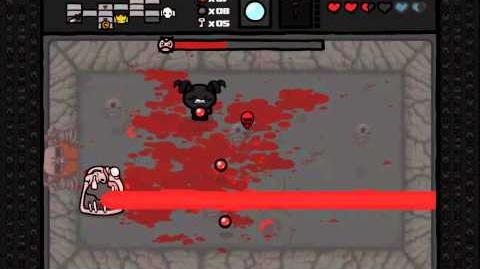 The Binding Of Isaac MONSTRO 2 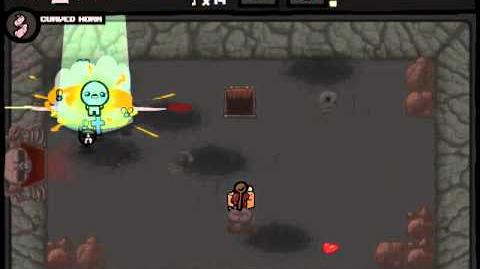