This article refers to the boss. For the item, see Monstro's Tooth.

Monstro, also known as the Hairlip, is a slow-moving but hard-hitting boss, commonly encountered in The Basement.

He will semi-randomly switch between hopping towards the player, spitting a burst of blood shots (signified by smiling), or launch into the air and land at the spot the player was standing in when he went up along with blood shots fired in many directions when he hits the ground.

Red Monstro is much smaller and has less health. An additional Monstro shows up, and you'll have to battle both of them simultaneously. In boss rooms, there will be two and in normal rooms in later levels, one will be added to the amount that would spawn in the room by default. Obviously, when smaller, it's harder to stay still and maintain fire, and with two or three of them present, it's best to run in a circle around them and never fully stop moving unless they're both just hopping around.

Gray Monstro is slightly larger and has more health. He can't launch himself into the air, and uses his shot attacks much more often. 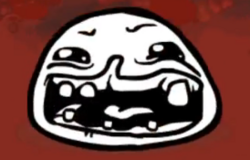 This variant was added in the Eternal Edition update but can be exclusively fought in Hard Mode. 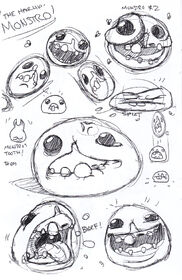 Monstro in the Artbook. 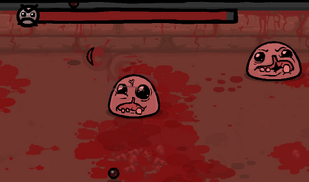 Monstro as seen on Isaac's Last Will