Mom's Heart (ママの心臓, Mama no shinzō) is the final Boss of The Womb 2. In the beginning of the battle, it is always accompanied by two Eyes.

After Mom's Heart has been defeated 11 times, it is replaced with It Lives!.

Mom's heart spawns two to four Monsters and then disappears. After killing those monsters, the heart will reappear in the middle of the room for 3–4 seconds, spawn more monsters, then disappear again. If you manage to kill the monsters within two seconds from their spawning (before the Heart disappears), Mom's Heart will stay on screen and spawn a next pack.

Eternal Mom's Heart has a similar set of behaviors, chasing the player around the room and spawning two to four Eternal Monsters. It attacks frequently during the battle, spawning blood bombs and making red Creep. Unlike the normal variant, Eternal Mom's Heart stays on screen at all times. If you manage to kill all the monsters in the room, the next pack of monsters will be spawned instantly. When Mom's Heart is on low health, it will spawn blood bombs at a faster pace.

Provided you have bombs, placing a bomb just as the heart is about to drop into vision will not only damage the heart, but may also destroy any monsters the heart spawns; this can afford you essentially double the attack time against the heart.

When Mom's Heart drops down to 33% health, it will stop hiding but continuously spawn monsters and start firing blood bombs similar to IPECAC shots. The explosions leave a large puddle of red Creep that damages Isaac on contact. The monsters it spawns in this phase are usually weaker, consisting largely of various small flies.

If you are lucky enough to make it to Mom's Heart with technology, stand on the same horizontal line as it on either side and just hold down the attack button. If you've positioned yourself right, everything it spawns will be in the same line as your fire, effectively killing it and damaging the heart without any movement.

Alternatively, using The Bible will act as an instant kill, similar to using it on Mom.

Mom's Heart is much more difficult to defeat when it is Eternal. It slowly regenerates HP, but it stays on the screen at all times. Moving around the creep is difficult and you'll likely suffer a few points of damage, but it's not impossible to manage. More troubling is the constant spawning of Eternal creatures-- if you haven't met enough of them because you rushed the Womb, you might have difficulty handling their unique attack patterns. Check their individual pages to learn the strategies for dealing with them, and treat them as if you were fighting them in a Vomit Grimace room.

It's recommended to leave some easy monsters alive since Mom's Heart will not summon new minions until all minions in the room are dead.

Mom's Heart's health is behind the HP bar.

The bug, and the chest that appears after you defeat Mom's Heart.

Mom's Heart after being damaged too much while still on the ceiling. 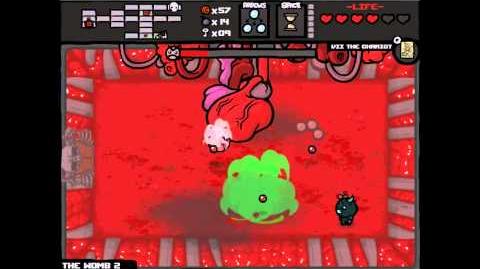 For the purposes of most achievements, Mom's Heart and It Lives are considered to be the same entity.

"The Halo" - Kill Mom or Mom's Heart using The Bible.