The Binding of Isaac Wiki
Register
Don't have an account?
Sign In
Advertisement
in: Bosses, Final Bosses
English

For other uses, see Mom (disambiguation).

Mom is the boss found in the second level of Chapter 3 (The Depths and Necropolis) and is the final boss for the game's prologue. The mother of Isaac, she is a delusional woman who believes that the hallucination she hears telling her to murder her son is the voice of God. If Isaac is going to escape from the terror under the house, he's going to have to kill her.

She has 4 basic parts:

Enemies summoned by Mom may include:

Mom, like other bosses, has a single health bar that depletes when any of her body parts are damaged. All enemies and body parts will be destroyed when her health is brought to zero. A common and effective strategy is to stay in the center area of the room. This will prevent Mom's hand from attacking and causing damage before it can be dodged. Use Mom's friendly fire stomp damage to help keep the spawned enemies at bay during the fight; you might have to deal with range attacking enemies which won't follow you to the center of the room. The corners of the room also do not cause the hand to attack, but may contain rocks that obstruct Isaac's path and might allow pursuing enemies to catch up. Use bombs or Mom's foot to clear a path of evasion against the enemies and foot damage.

Using XIX The Sun, XIII Death, Spider Butt, Blood Rights or Necronomicon are good choices against Mom because the effect will hit every body part active on the screen, which can cause very heavy damage.

As with all bosses, having Mom's Bra is just as effective against Mom as it is against any other boss. Use the time that she's frozen to deal as much damage to the leg as possible.

You can also stand near her eyes/other parts when she's about to stomp. If you get away at the last second, she'll stomp on her self, dealing massive damage to her.

Mom will not use her stomp attack if Isaac is standing very close to any of the 4 doors. (This seems to be implemented so that players cannot force mom to stomp herself without at least risking to take damage). So you just can stand there, shoot at the door and dodge spawned enemies until you kill her, scoring yourself a very easy victory.

The Bible is Mom's major weakness and can be used to defeat the whole encounter instantly. This holds true also for Mom's Heart and It Lives.

NOTE: The Bible should not be confused with the similar looking Book Of Revelations item which will not instant-kill her. The Bible is brown with a black cross, while the Book of Revelations is purple with a white cross. 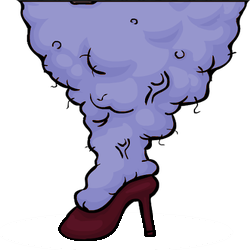 The Blue Mom variant spawns only enemies added in Wrath of the Lamb (Trites, Keepers, Big Spiders and B. Lickers) instead of the enemies she would normally spawn. 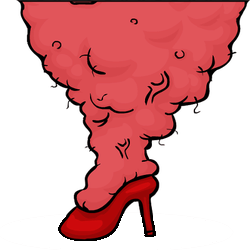 The Red Mom variant stomps faster, uses her hands more often and shoots triple blood bullets from her eyes. This version does not spawn enemies at all.

In Hard Mode, the Eternal Mom will sometimes spawn a small Eternal Monstro. Her hand attack also shoots bullets in 8 directions. Other than these, she's almost the same as normal Mom.

This variant was added in the Eternal Edition expansion.

The Halo - Kill Mom or Mom's Heart using The Bible.

Mom's foot coming down from above.

One version of Mom coming through the door.

Another version of Mom coming through the door.

Mom's eye coming through the door.

Mom's Hand coming through the door. 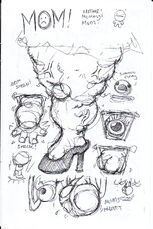 Mom in the Artbook. 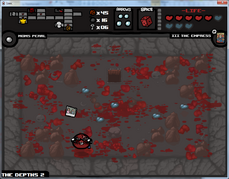 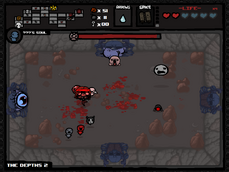 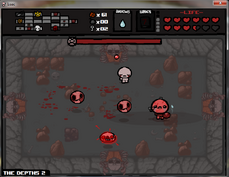 Battle against Mom's spawns
TwoPolaroids.png
A second Polaroid being dropped after defeating Mom. If you already have the polaroid,however, it cannot be picked up.