Lust (ラスト, Rasuto) is one of the Seven Deadly Sins appearing in both The Binding of Isaac and the Rebirth remake.

She is a pink version of Isaac under the influence of The Virus.

She's quite fast and attacks by trying to deal contact damage, but has no other attacks.

As stated above, Lust has no attacks other than simply chasing Isaac, which can be much more threatening than it seems. If Isaac has no speed boosts, or has even lost speed, Lust can be a very difficult boss. The best way to fight Lust seems to be to break sightlines as much as possible. Lust slows down to a "searching" mode when she loses sight of Isaac, and this can be used to add distance between the player and Lust. Using the spawned rocks and quickly turning corners can conserve hearts and make this fight easier. Use of bombs can block her movement, as she is unable to push them away, but also won't walk around them.

Tears that induce slowness (including Ball of Tar and Little Gish) or fear (including Mom's Perfume and Mom's Bra) prove effective in negating Lust's only method of dealing damage. Another way to defeat her with flight and/or spectral tears; this allows for a unique strategy in which a player flies directly over rocks and fires at Lust as she pursues. Due to Lust having no way to destroy the rocks, she'll have no way to attack the player.

Lust drops The Virus or a random Pill upon death.

Eternal Lust acts exactly the same as normal Lust, but moves much faster (even faster than Super Lust).

On death, she always turns into a larger Eternal Maw and a buffed Eternal Gusher which moves at her speed. 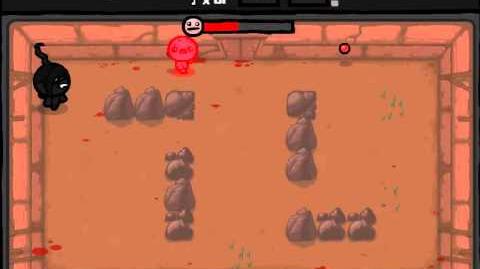 The Binding of Isaac - Lust
Community content is available under CC-BY-SA unless otherwise noted.
Advertisement