Larry Jr. (ラーリ・JR., Rāri Junia) (also known as The Lil Larries and Centi-Boy from the artbook) is a boss that can be encountered in The Basement. He is a pair of segmented worms.

Larry Jr. is a light tan-colored, worm-like bug that comes in different number of segments. He sports with a blood-stained mouth filled with long teeth. His beady black eyes are also appears to be shedding tears.

Larry Jr. is always paired with duplicates (though sometimes it might appear as one single long chain), and will quickly crawl around the room, leaving behind Poop piles. Larry Jr. has an erratic movement pattern as he appears to ignore Isaac until the player walks directly into his path, similar to the Charger Maggot - which is also similar to Larry in appearance. It also randomly leaves poops on its path which might block the player's way.

Larry Jr. has multiple segments, each that have to be destroyed to kill the boss. Destroying the head will cause the previous segment to become a head, and so on until all of the segments are destroyed. A segment that is not connected to any other segments (due to the middle segment being destroyed) will die instantly, which makes the fight easier for characters with low damage.

When green, he will fire slow-moving and short-ranged shots randomly in whatever direction he's facing at the time. He will also have slightly lower health.

He will be slightly larger, slower, have more health, and not produce any poop piles. A Soul Heart is always dropped after fighting this boss.

Eternal Larry Jr.s will slowly grow new segments. Instead of dying when only a head is left, the head will move at half its normal speed while leaving red Creep where it moves. Single heads are quicker to gain new segments, and will behave normally after one is regained.

Larry Jr. sometimes shows up in other rooms later in the game starting from The Caves up to The Womb. He can appear in groups of three or more, and in its green or blue champion variants. The more Larry Jr.'s appear in the same room, the shorter each one of them is. 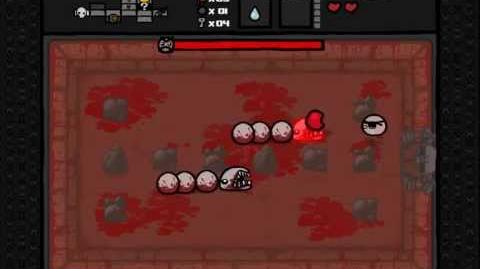 The Binding Of Isaac LARRY JR