The Binding of Isaac Wiki
Register
Don't have an account?
Sign In
Advertisement
in: Minibosses, Bosses
English

A Lump Of Coal

Krampus is the mini boss added to the game during the Christmas update. He has a 10% chance to appear in a Devil Room. He is considered as an alternate version of The Fallen.

Krampus has a look similar to The Fallen, but appears larger with longer horns and white head.

Krampus' main attack consists of spitting two salvos of bullets, one with 3 and the other with 4 bullets. If Isaac aligns himself vertically or horizontally with Krampus, he will react by quickly shooting up blood beams in all four cardinal directions (similar to The Fallen's attack).

After defeating Krampus, he drops the item A Lump of Coal and a random pickup may spawn (like when finishing a normal room).

Eternal Krampus acts similarly to normal one, roaming around the room and shooting bullets at Isaac often, but it will repeat the bullet attack for 4 times in a rapid session. It will more likely to use its brimstone attack if Isaac aligns with it.

"A Gift From Krampus" - Defeat Krampus in the Devil Room. 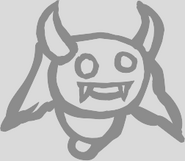 The Pumpkin Mask that was replaced by A Lump Of Coal

Krampus in the Devil room 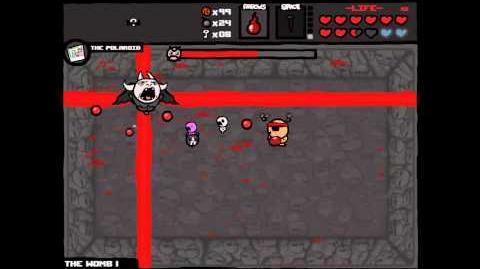