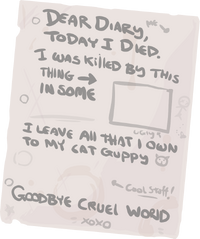 Isaac's Last Will is the Game Over screen of the game. It is shown when Isaac runs out of Hearts, and offers a breakdown of the player's progress in the game. It follows the following format:

To the right a distressed Isaac is shown, switching between him bloated, tripping, etc.

I was killed by this thing →

The blank will be filled with the following descriptions, depending on which Chapter the player got to.

I leave all that I own to my cat Guppy (cool stuff!)

All of the Items collected by Isaac will be listed here, with the same icons from the pause menu and the Collection page.

The character's name will fill in the blank.

All forms of the distressed Isaac picture. 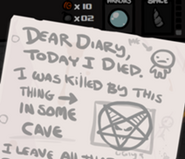 The death icon shown when killed by a deal with the devil.