The Caves, The Catacombs

The Depths, Necropolis
Hives are enemies with a large rotting head inhabited by flies who can be found in The Caves and The Depths. They're fairly harmless but will spit out flies on occasion and release more on death. They might be considered an evolved form of Mulligans/Mulligoons, as they behave similarly to them and they sound the same when whimpering. Hives are considered to be a weaker version of The Duke of Flies as they both spit out flies and do not directly attack the player.

They act similar to Mulligans and Mulligoons, as they try to flee from the player. This frequently makes them run into dead ends or fireplaces. However, do not be fooled by their passive behavior; they will vomit flies if you are in their line of sight. On death, they will spawn up to five Attack Flies, Large Attack Flies, or Pooters. Unlike Mulligans and Mulligoons, Hives do not randomly explode.

The Hive's behavior gives the player the possibility to drive the Hives into edges or dead ends. If they are driven into corners or obstacles, it becomes much easier to kill them. They tend to vomit flies as you are shooting at them, though, so be careful about that.

It is not recommended to charge tears if the player has picked up Chocolate Milk. Charge shots will likely hit any flies a Hive has just vomited up as a last-ditch effort, thereby wasting the time it took to charge the shot.

Added in the Eternal Edition update, the Eternal Hive can be only fought at Hard Mode and, out of all enemies, comes with two unique types. 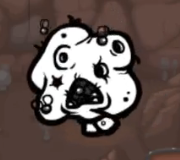 This Eternal Hive variant vomits 2 flies at the player instead of 1, and bursts into flies, Fat Flies and Spiders on death. 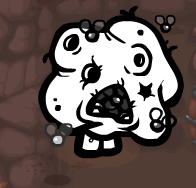 A miniboss version of the Eternal Hive appears larger than weaker variants, has 2 Eternal Flies surrounding itself, and vomits Eternal Flies while running away from Isaac. It explodes into several Eternal Flies and Spiders on death, and will always drop an Eternal Heart.