Gurdy Jr. (ガーディJR., Gādi Junia) is a boss added in the Wrath of the Lamb expansion. The daughter of Gurdy, she can be encountered in the Cellar and the Catacombs as a boss.

Up to three of them might also appear in regular rooms as a mini-boss in Cathedral, The Chest and also rarely in Utero and even Necropolis.

Like her mother, Gurdy Jr. can spawn enemies and fire bullets, though her attack strategies differ somewhat. Junior spawns Pooters and can shoot a barrage of blood bullets in eight directions. Unlike her immobile mother, she can also charge at incredible speed diagonally towards Isaac, bouncing off anything she comes into contact with while she keeps on moving. This attack is very unpredictable, and it starts without warning.

Even if you're fast, it's advisable to keep your distance from this boss at all times. Always try to align yourself horizontally to her, as her straight charges are much slower than her diagonal ones. It's possible to slow this attack down via knockback by shooting at her while she's charging, but this is only to be used as a last resort unless you possess high amounts of knockback through a high tear rate and high damage. Gurdy Jr. will freeze in place if she uses this attack while affected by Little Gish's slowing projectiles. Once she's at low HP, she'll only use charge.

This variant of Gurdy Jr. only uses charge attack. She is much smaller and has less HP in this form but you'll have to fight 2 of them (3 or 4 on later floors) simultaneously. They always drop a Soul Heart on death. 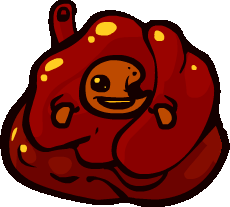 This variant of Gurdy Jr does not fire shots. In this form, she only spawns Fat Flies and charges at the player. Also seems to have more health and is larger than regular one.

Eternal Gurdy Jr. acts similarly to the original one, but she fires 16-way bullets and her charge attack can destroy rocks. She also spawns Eternal Pooters or Fat Flies, and has health regen.