Gurdy (ガーディ, Gādi) (also known as The Pile from the artbook) is one of the bosses found in The Caves from The Binding of Isaac and the Rebirth remake. She is a static boss that remains stationary in the middle of the room. When Isaac first enters the boss room, Gurdy is accompanied by a few Boils and Flies of random variety.

She is a small humanoid with a slight Isaac-resembled appearance inhabiting a huge pile of guts. In addition to her face, she is missing a left eye and her teeth look slightly crooked.

Gurdy's basic attack is firing five shots at once, in one of three different directions. This is indicated by her pulling her head inside, and making it reappear at another side.

Gurdy can also summon Attack Flies out of the pores on her body periodically to attack. On occasion, she will also spawn a Pooter/Fat Fly out of the larger pore on the right side of her body.

Lastly, she can summon two Boils (which can be replaced by a Gut or a Sack) at once in front of her, which is signaled by raising her arms. 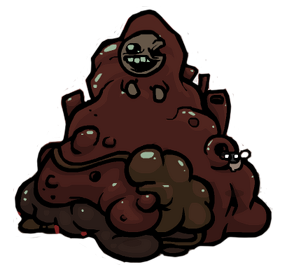 In this form, she does not spew bullets; instead, she will continuously spawn various flies and boils.

In this form, she fires a wide spread of 16 blood shots. She also spawns eternal Boils but the Pooters she summoned will not be eternal. 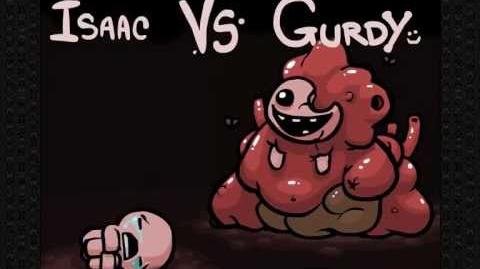 The Binding Of Isaac GURDY