The Binding of Isaac Wiki
Register
Don't have an account?
Sign In
Advertisement
in: Minibosses, Deadly Sins, Bosses

Mini-Boss Room
Gluttony is one of the Seven Deadly Sins. He is a Vis with a large, fat head that has small, beady eyes.

Gluttony has 2 main attacks; an 8-way blood shot and a blood beam attack, similar to that used by Vis.

The room he appears in will always have the same setup, with Pits around him.

Gluttony is a relatively easy mini-boss, with only 2 attacks. His blood beam attack is very easy to predict and takes a long time to charge, so it can be avoided quite easily. Likewise, the "pop" attack, where he fires shots, can be avoided with ease so long as Isaac keeps moving. Additionally, Gluttony will signal this attack by shivering for a short time before firing, making it easily avoidable. In general, do not spend too long directly horizontally or vertically of Gluttony, and only dash in to deal damage. Remember that as with Vis or Bloodshot Eye, the blood beam will go right through Rocks and other obstacles. Also keep in mind that while he does normal damage with his ranged attacks, he deals a full heart of contact damage. If Isaac follow those steps, your main weakness is patience.

Gluttony drops several Hearts and half-hearts on death, and may drop the <3 item, which restores all HP and adds 1 Heart Container. 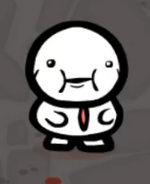 Eternal Gluttony is a strengthened variant and uses 2 attacks: