Not to be confused with the item of the same name from Rebirth.

Gemini (ジェミナイ, Jeminai) (also known as simply The Twins from the "Unholy Edition" art booklet) is a conjoined twin boss encountered in The Basement from The Binding of Isaac and the Rebirth remake.

Contusion is the larger twin while Suture is the smaller one.

Gemini are a set of conjoined twins attached by an umbilical cord. Contusion (the large one) has two teeth bucked out and is missing an eye with multiple markings. Suture's (the smaller one) eyes are always closed until Contusion's killed. Their HP is divided equally to each one.

The larger of the two will walk towards Isaac, trying to deal contact damage. Eventually, he starts charging with increased speed for few seconds. Right after charging, he runs out of breath and has to stop, leaving him vulnerable to attack. The smaller one drifts along at a distance, and will fire fast-moving blood shots at Isaac if he comes near and isn't behind cover. The umbilical cord acts like an elastic tether, keeping them in roughly the same area while not restricting range of movement too much.

Killing the larger twin will cause the smaller one to turn incredibly red when becoming enraged, abandoning ranged attacks in favor of charging at Isaac (if the player deliberately focus-fire the small one from the start, it will be killed and they only have to focus on the big one, whose behavior will not change). While enraged, the smaller twin takes a lot more knockback, which can be troublesome if care is not taken.

Gemini starts off with the two detached; however, the smaller one will act as normal. If enraged by the death of the larger one, it does not move as fast as the normal one. However, there is a chance where just the smaller half of him is green. In this case, it's easier on the player, as when it starts its charge, it'll move slower towards the player and is much less of a threat.

Gemini starts out with increased health, but decreased speed, which is more noticeable if the larger twin is colored. This actually makes Gemini easier, though it takes longer to defeat. As with the Green Champion, there is a slight chance of only the small twin becoming blue, resolving in the older one acting normally, but the smaller twin moving very slowly. Both twins' overall health is increased.

Gemini starts out with two of the smaller twins attached. The large one is capable of destroying rocks. The first twin comes off when the larger third of Gemini is at half health, and the second comes off when the larger third is slain. As long as the large one is alive, all 3 of them slowly regenerate HP. Smaller ones have increased firepower - shoots 3 blood shots per attack.

It's possible to have only one of them being champion variant. 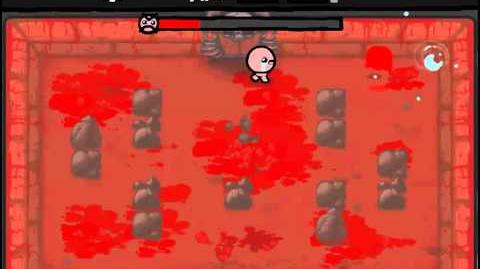 The Binding of Isaac - Isaac vs Gemini FLAWLESS RUN