The Caves (Original only)

Fistula (フィステューラ, Fisutūra) (also known as "Meat Ball" from the artbook) is a boss found in Caves and Catacombs from the original game. In Rebirth, however, it is found in the Cellar only.

Fistula's appearance is extremely grotesque-looking, made of pieces of rotten flesh (with red fleshy skins from the inside) sewn together with thick stitches to form a large sphere. It sports with several hair strings, warts, and holes. In Edmund's artwork (and including the one from Rebirth), a few Chargers can be seen peeking out from the holes.

It resembles Envy in how it behaves, beginning as a single entity before splitting into four smaller entities upon taking damage, which then each split into two with further damage. However, unlike Envy, when reduced to the lowest size, the sections become Chargers.

The smaller a piece becomes, the faster it moves around. Pieces can also collide with each other, which changes their direction. Because of this, it is recommended to leave bigger parts intact for as long as possible, and focus on one part at a time. That way, the movement of the parts is more predictable, making the parts easier to dodge. It is also advised to kill the Charger before moving onto the next part, if possible.

Despite floating in the air, Fistula and its parts cannot move over Rocks. However, as of the Wrath of the Lamb expansion, it can move over Pits.

Fistula appears regularly as a Mini-Boss starting from The Caves to Sheol. In The Caves and The Depths, it starts as two smaller entities, and in The Womb and Sheol, a whole Fistula appears. 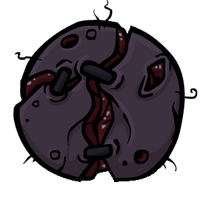 In this form, it will initially split into three entities instead of four and will spawn Boom Flies and Red Boom Flies on death. This version of Fistula has slightly more health, is larger, and moves slower.

Every time it splits, it shoots 8-way bullets. It also spawns Eternal Spitties on death. 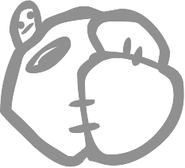 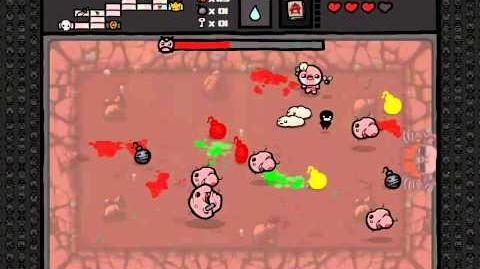 The Binding Of Isaac FISTULA 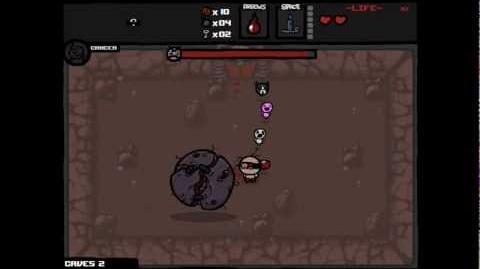