The Binding of Isaac Wiki
Register
Don't have an account?
Sign In
Advertisement
in: The Harbingers, Bosses
English

Defeat Mom for the first time.

Famine is one of the four Horsemen of the Apocalypse, a boss encountered in The Basement or Cellar after completing the game for the first time.

He appears as an eyeless, grinning humanoid with cracked lips riding upon a hobby horse, both of which are severely emaciated.

Just like the other three harbingers, Pestilence, War and Death, he will drop a Cube Of Meat when defeated, which cannot be re-rolled with the Dice.

Famine will begin his fight with a very fast charge to the left or right that will make him go through the walls and come back from the other side, stopping at his original location. After that, he will stay in practically the same spot and spawn a Pooter or a Fat Fly, capable of having a maximum of two at any given time.

For as long as these flies are on-screen, he will not move around much and will not charge until Isaac gets in his line of sight. These charges will destroy any flies in the way, so it can be an effective strategy to force him to charge as much as possible.

When he only has a third of his health left, his body and horse will be destroyed leaving only the head, and he will start saying "hey" as pestilence does in his first phase. He won't be able to move around much or spawn any more flies, but it will fire fast-moving triple shots (one in the center and two in a split pattern to the sides) directly at Isaac's location. 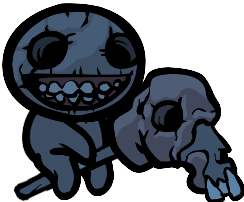 Blue Famine's first phase attacks in a six-way pattern (no bullets in vertical directions). He also charges faster, at a much higher rate than normal. While charging, he moves slightly (diagonally if needed) towards Isaac, and makes a complete charge around the room rather than just stopping short as per his non-champion form. When he loses his body and horse, he'll attack by vomiting bullets similar to Scolex or Monstro. 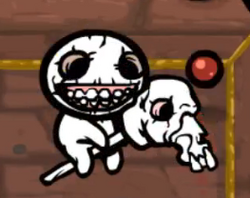 This variant was added in Eternal Edition but exclusively encountered in Hard Mode.

Famine as shown on Isaac's last will