The Binding of Isaac Wiki
Register
Don't have an account?
Sign In
Advertisement
in: Wrath of the Lamb, Rebirth, Afterbirth,
and 3 more
English

Complete the The Doctors Revenge! Challenge.

A fetus in a jar, similar in appearance to Dr. Fetus, with the exception of the jar 'wearing' a top hat.

Isaac's tears become guided missiles, controlled in the same way as those fired by the Doctor's Remote item.  When fired, a large crosshair appears on the ground in front of Isaac which can be moved by either arrow keys or by clicking with the mouse.  After approximately one second a missile will drop from above onto the crosshair, exploding with the same range as a normal bomb and dealing 80 damage.

The damage and fire rate of the missiles, as well as the travel speed of the target crosshair, are fixed and are completely unaffected by any other items or stat changes.

Locks firing rate (including that of multi-shot effects like Mom's Eye) to the time it takes for the missile to strike and detonate.

It's always recommended to use Mouse to control after obtaining this item.

The message received after defeating the boss of the Womb II or Utero II during the "Doctor's Revenge!" challenge, unlocking the new item Epic Fetus. 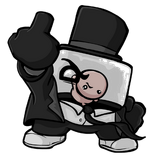