Envy (エンヴィー, Envī) is one of The Seven Deadly Sins appearing in both The Binding of Isaac and the Rebirth remake.

He is a floating grey figure with a large grin on his face (a reference to the Trollface meme) and a split on his torso.

Envy moves around the room, damaging Isaac when he touches him. When his health reaches zero, he splits into two smaller, faster moving versions of himself that have less health. These smaller versions can split into two again, and those again, making it possible to have up to 8 mini-envies on the screen at once.

It is recommended that the player focus specifically on one half split off from each division. This minimizes the total number of enemies that need to be kept track of, and makes the boss significantly more manageable. The general strategy is to split him in half, and then hit one half until he divides again. Repeat the process until the smallest divisions are destroyed. Then return to killing the slightly larger halves until the boss is defeated. This strategy is especially important when fighting multiple Envies in higher levels such as The Womb or Sheol. Alternately, if the room containing Envy has a natural barrier or alcove to stand in, you may use your natural knockback effect to remain virtually untouched. Attack flies, such as Forever Alone, are very effective against Envy, since if he touches the attack fly, he constantly and quickly takes damage as long as the fly is touching him.

The last mini-Envy killed will usually drop a Troll Bomb where it dies. Rarely, he may drop the Shoop Da Whoop! item.

Eternal Envy in full form constantly shoots blood shots in either clockwise or counter-clockwise direction and will drop an Eternal Heart upon his first spilt. Everytime he spilts, he shoots 4-way blood shots in "+" pattern. 2 same-sized smaller versions can merge into their larger forms and fully restore HP if they bump into each other. 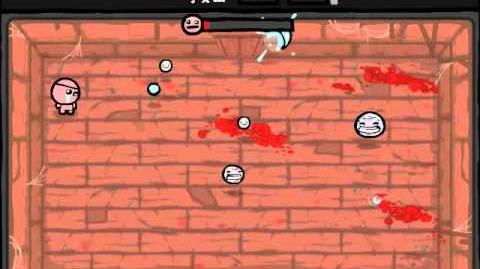 The Binding of Isaac - Envy 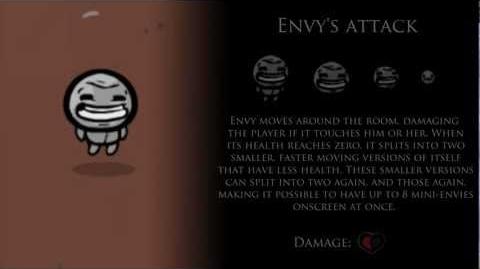