The Binding of Isaac Wiki
Register
Don't have an account?
Sign In
Advertisement
in: Items, Vanilla content, Reference to another game of Edmund McMillen,
and 2 more
English

A fetus in a glass jar.

Upon pick up, it replaces Isaac's tears with bombs. Only one bomb can be shot at a time (unless the Cancer trinket is equipped), and it will go for a fixed range before exploding. The bomb can slide over Pits, although not through rocks (unless the player has items that grant spectral tears, such as the Ouija Board). The bombs fired can be pushed around. Bombs detonate faster as the Tears stat increases.

6 extra copies of Bobby-Bomb and Mr. Mega are added to the Treasure Room pool once Dr. Fetus is picked up.

Dr. Fetus as shown in Ending 5 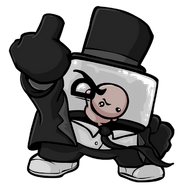