Death (デス, Desu) is one of the four Horsemen of the Apocalypse. He is a boss which can be encountered at the end of The Womb and Utero 1 once the player has beaten the game for the first time (killed Mom).

He looks like an eyeless, gray humanoid-like being with a skinny, pale grey body and a hollow skull, riding a skeletal hobby horse. His blood is also completely black. He will surround himself with the Grim Reaper's trademark weapon, the scythe.

Like the other three harbingers - Pestilence, Famine and War - Death leaves a Cube Of Meat upon defeat which cannot be rerolled with The Dice. 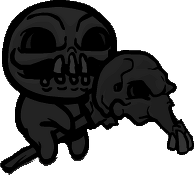 Slightly larger and has more health than normal Death. He always spawns 4 scythes and instead of using the Hourglass, he spawns two Kamikaze Leeches. While separated from his horse, he periodically spawns two Red Maws instead of Knights.

Eternal Death acts almost completely identical to its normal counterpart. However the scythe projectiles it summons will immediately move rather than waiting for a bit. He also randomly spawns Hosts during phase 1.

Once it dismounts from its horse, it behaves completely like its normal counterpart.

Death from the starting screen. 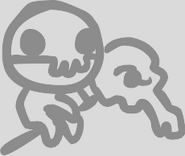 Death as shown on Isaac's last will. 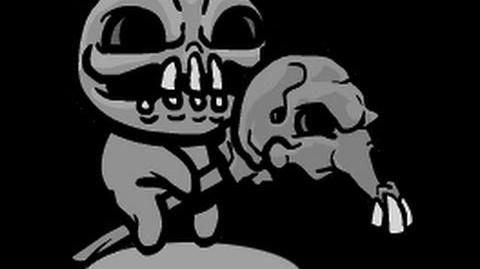 The Binding Of Isaac Death
Deutsch
Community content is available under CC-BY-SA unless otherwise noted.
Advertisement