Not to be confused with the item of the same name.

The Womb
Utero
Daddy Long Legs (あしながおじさん, Ashinaga ojisan) is a spider boss added to the Wrath of the Lamb DLC for the original game. He can appear in Necropolis, The Womb or in Utero. He can also appear as a mini-boss in Cathedral and The Chest. 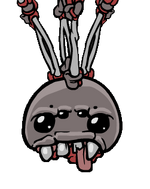 Daddy Long Legs is a giant, spider-like creature with grey colors and six eyes; two larger while four smaller. His mouth sports with few ugly-looking teeth, a lolling tongue, and a lack of jaw. From the top of his head are four longer limbs made with bones and red-colored flesh.

He hovers in the middle of the room much like Mom's Heart. He has 4 different attacks:

During his first attack, zoning doesn't matter — he'll stomp anywhere on the ground to catch Isaac while you're running. Look out for the shadows of his feet and avoid them at all costs. During this attack, Isaac can only damage Daddy Long Legs directly when he is "lowered" to the ground. Otherwise, Isaac will have to damage him by shooting his feet, which are rather thin twigs of bone. During his second attack, running matters a lot. He'll follow Isaac much like Mom's foot, but at a more constant pace. His foot comes down quickly, but doesn't have the best range. Simply run a circle track around the room to easily avoid this attack. If Isaac don't have enough speed, he might want to try some other tactics like a bit of a wiggle line.

There is no strategy required for his final attack, as it simply happens once at the end of the second attack. Simply run at all costs until he slams his head down, in which he will get back up and stay in that position. He will resume again by doing his second or first attack.

In The Chest, his leg stomp can open the way to the Secret Room.

Daddy Long Legs trying to stomp the player with his foot. 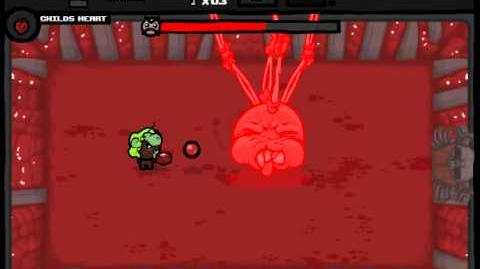