Curse of the Lost

Curse of the Lost increases the size of one "tier". (For example, The Caves affected by Curse Of The Lost would be as large as The Depths)

Removes the map, replacing it with a single black room with a question mark in the middle (same as the Devil Room) for the duration of that floor. Having the Treasure Map or The Compass will not override this curse. Ever since the Eternal Update The World or The Sun Tarot Cards and Crystal Ball will override the curse.

Curse of the Labyrinth

The two stages of a floor are replaced by one large map, larger than the typical size of both stages combined. The floor is given the "XL" suffix when affected by the Curse Of The Labyrinth. (If this curse applies to certain floors, the "XL" suffix does not appear as a result of lack of space. Sliding your mouse to the right of the floor name will show the "XL" suffix.)

The map features two Treasure Rooms and two Boss Rooms, but only one Shop, one Secret Room, etc. Bosses are found next to each other, requiring you to defeat the first boss to access the second. You cannot get Curse of the Labyrinth in Sheol, The Cathedral or The Chest, since those levels have only one stage.

Chances for a Curse to happen

The base chance for a curse to appear 1.25%. This chance is replaced depending on which secrets have unlocked:

The chance is now calculated as follows: 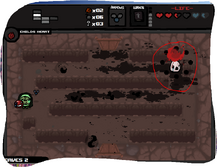 Curse of the Labirynth too large for the screen