Cube of Meat is an unlockable passive item.

A small block of meat, with light shining off it.

Multiple Cubes of Meat can be combined to create a Meat Boy familiar.

Cubes of Meat can only be acquired by defeating one of the The Harbingers‎‎, and each Harbinger must be defeated in one run to fully form Meat Boy. This becomes much easier to achieve if the player uses the Book Of Revelations.

The first Cube of Meat picked up acts as an orbital similar to the Pretty Fly. It damages enemies on contact and blocks projectiles.

The second pick up gives the orbital a rounded face resembling that of Meat Boy. It still damages enemies on touch and blocks projectiles, but now also spits blood shots in the direction Isaac is shooting.

The third pick up gives Meat Boy a body. He now behaves as a familiar rather than an orbital, and will chase after nearby enemies to deal contact damage, similar to the headless body created by The Pinking Shears item. At this stage, he no longer spits projectiles or blocks incoming shots, and will unwittingly shove items around while following you or attacking enemies, including lit bombs. 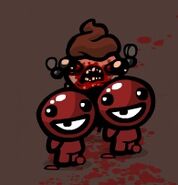