The Binding of Isaac Wiki
Register
Don't have an account?
Sign In
Advertisement
in: Wrath of the Lamb, Rebirth, The Harbingers, Bosses
English

Conquest (コンクェスト, Konkuesuto) is a Boss that can be encountered instead of Death in The Womb and Utero. He is unlocked after defeating Mom for the first time.

Despite the fact that he can replace Death, he is the alternate version of War.

He has pale white-blue skin, wears a white band that covers his eyes, has a large stitch on his chest, and rides on a white horse.

Conquest's behavior is somewhat similar to War. He shoots 4 fast purple homing shots in the cardinal directions. Sometimes Conquest teleports off-screen and random locations are bombarded with beams of white light, similar to the Crack The Sky item. Conquest also charges off-screen and summons several clones of himself that charge alongside him.

The following should be considered when battling Conquest:

After his defeat, he drops a White Pony.

Eternal Conquest's charge-off-screen attack spawns Gazing Globins as he summoning clones, though most of them are soon killed during his charge. The "Crack The Sky" attack has more white beams.

The secret for unlocking Conquest by destroying 30 'X-Marks the Spot' rocks.

Conquest charges with his clones. 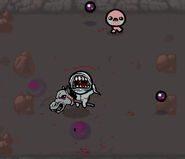 Conquest use his homing projectiles.

Conquest calls down beams of light. 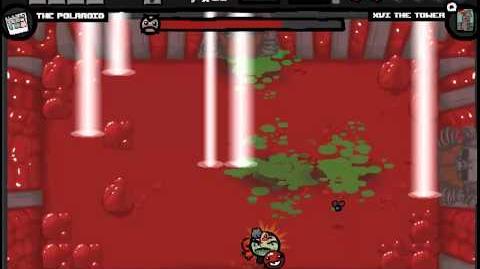 The Binding of Isaac - Conquest
Deutsch
Community content is available under CC-BY-SA unless otherwise noted.
Advertisement