The Binding of Isaac Wiki
Register
Don't have an account?
Sign In
Advertisement
in: Environment, Wrath of the Lamb

This article is about the item. For the chapter, see the Chest.

Chests are items which contain other items, and are often rewards for progressing through the game and finding hidden secrets. There are two main types of Chests, Golden Chests and Normal Chests. Most of the chests are spawned in locations which require the use of a pickup or an item to get to. Chests can also rarely spawn after beating a room or killing a "champion" version of a normal enemy. In challenge rooms, plain or golden chests are most commonly spawned.

Regular Chests contains one to three of the following items:

If not containing these, it contains:

Golden Chests cost one key to unlock. The contents are the same as regular chests, but also has a chance of dropping more pickups (up to 5, excluding coins of which it can drop more) and occasionally it contains a random item. On rare occasions, it can contain Fate.

Items that can spawn in Golden Chests:

The final type of chest spawns after beating the final boss. Touching it ends a successful run and will play the accordant ending. Although, if you are carrying the Polaroid, and reach the end of The Cathedral, the End Chest will take you to another "bonus" floor, called "The Chest". Likewise, holding the The Negative and touching the End Chest of Sheol will transport you to The Dark Room.

These have a chance to appear in the angel room with the Afterbirth DLC, and requires a key to be opened. Blue chests can be used infinitly with the Golden Key, or 99 times with the Skeleton Key. When a blue chest gets opened and has nothing inside, you can't use it anymore. 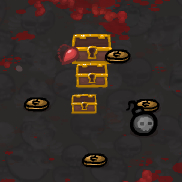 Four chests in a row, the last one containing Dessert (already taken when the screenshot was made)

A rare case (or possibly a bug) when a single golden chest contained almost two dozen drops. Not pictured the few ones the player already accidentally picked up.

4 golden chests in the row
Community content is available under CC-BY-SA unless otherwise noted.
Advertisement