The Carrion Queen (カリオン・クイーン, Karion Kuīn) is the posthumous version of Chub that appears as a boss in the Catacombs and Necropolis, and as a miniboss in the Chest. She appears as a skeletal worm with a soft, fleshy spot at the very back of her tail.

Carrion Queen's movement pattern and charge attack is identical to Chub's. However, she can only be damaged by firing shots at her uncovered tail (much like Knights) or by being fed Bombs during her charge.

Instead of spawning monsters, she spawns Red Poop. These piles can be collapsed much like regular poop, but will regrow shortly after.

When her health reaches below the halfway point, her attack pattern changes to a mad dash about the room in a zig-zag pattern, similarly to The Hollow. If her tail is shot during this phase, she will immediately change direction as if bouncing off of a wall. She does not charge at Isaac during this phase. If any poop piles linger from the first phase, she can bounce off them to unexpectedly change her path.

She is smaller in size and does not move diagonally during the fight. This version also spawns tiny Hearts (40 HP each), which shoot bullets in a long ranged cross pattern, instead of red poop. Killing a heart will deal 40 damage to Carrion Queen, in addition to her standard weak point. This form is best killed by attacking the hearts.

Eternal Carrion Queen is basically the same as her Pink variant, but spawns Eternal Hearts instead. Shooting at her head also causes the tears to be reflected back. 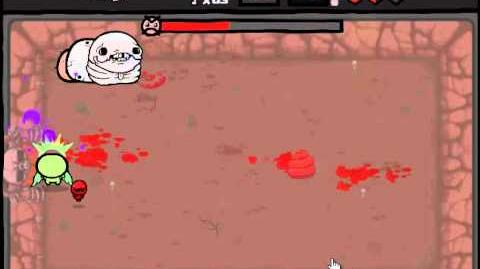