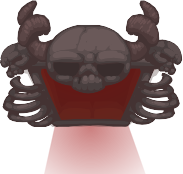 The Boss Room is a room where the current floor's boss is fought, and the boss must be defeated in order to progress to the next floor (unless Isaac is teleported to the I AM ERROR room or uses the We Need To Go Deeper! item).

It is located on every floor, all the way up to Sheol and The Chest.

The room has a frame made out of bones and the room symbol and top of the door frame is a skull.

In the Boss Rooms on non-final boss floors, the song "Divine Combat" (regular Bosses) or "Crusade" (Wrath of the Lamb Bosses) plays in the background during the boss fight. In The Depths/Necropolis II, which plays "Thine Wrath..."; The Womb/Utero II, which plays "...Be Done"; Sheol, whch plays "Enmity of the Dark Lord"; and The Cathedral and The Chest, both of which play "My Innermost Apocalypse". Once the boss has been defeated, the song "Peace Be With You" plays.

A standard completed Boss Room in the Basement floor, with the item Mom's Heels.

Bug: Boss room with no boss and no trapdoor. Level cannot be completed.
Community content is available under CC-BY-SA unless otherwise noted.
Advertisement