The Blastocyst (ブラストシスト, Burasutoshisuto) is a rare boss composed of a large gelatinous bubble with an Embryo in its centre that will occasionally appear in the Womb/Utero. Rarely, instead of the large form, two medium and two small Blastocysts will appear. Several non-Boss variations with a shell are occasionally found in the Womb (or very rarely in the Depths), though the weakest versions (with just the non-hostile Embryo) can be found in most floors, particularly in rooms with a blood donation machine. Due to its behavior, it is essentially a weaker Monstro version encountered in The Womb.

In its largest form, Blastocyst can do a low hop, sometimes scattering bullets all over the place. It can also do a large jump shooting in 8 directions upon landing. It will split into two smaller versions upon taking enough damage.

In its next form, Blastocyst can shoot a 4 way shot either in the four cardinal directions or diagonally when it lands after jumping. It also splits into 2 smaller forms upon taking enough damage.

In its next form, it fires a 4 way shot in the four cardinal directions after being still for a short time. It does not shoot when landing after jump. It loses its bubble upon taking enough damage and becomes an Embryo.

There are two versions of Eternal Blastocyst. They look identical but their attack patterns are different.

An additonal Eternal Angelic Baby is spawned when it loses its bubble and becomes Embryo.

Eternal Blastocyst in its full form will always shoot Monstro's blood shot cluster whenever it lands. Once it spilts for the first time, it becomes the same as its normal version.

Blastocyst in the Artbook. 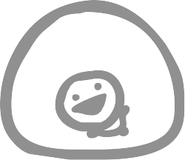 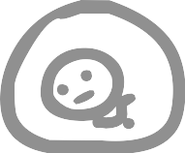 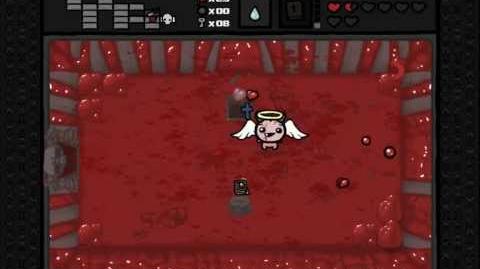 The Binding Of Isaac BLASTOCYST
Deutsch
Community content is available under CC-BY-SA unless otherwise noted.
Advertisement