The Arcade is a room that can spawn if the player starts a floor with five or more pennies. It costs one penny to enter. It is marked by the word "Arcade" written outside the entrance. Occasionally, one may find a heart or coin on the ground upon the first entry. There can also be a Rock, a Tinted Rock, or Poop.

Inside the room are 3 usable stations:

Bet 1 coin by tapping the beggar. Then, the player is shown health, a bomb, a key, a coin, or the grand prize of Skatole under a shell (A Host's skull), and the shells are shuffled in a manner impossible to follow. Touch the shell you believe the object is under in order to earn one to three of that item. There is a 33% base chance to find the item, and the chance is not related to the luck stat. The Lucky Foot does automatically give you a second chance to win at 33% if you lose. This gives you a 55% chance to win each game.

Success will yield the item that was visible when the round started. If a pick-up was under the shell, the dealer will give you up to three items of this type (e.g. 1-3 hearts, bombs, or coins). As usual, each type of pick-up might get replaced by an alternate form of the same type (e.g. each heart might also drop as half a heart or a soul heart instead of a full heart, and each bomb might also drop as 1+1 free or a troll bomb instead of a regular bomb). If you win the grand prize (Skatole), the Shell Game vendor leaves in a similar fashion to a beggar.

Failure causes an Attack Fly to appear and attack you, so make sure to move away from the shell you've chosen to avoid getting hit. As a precaution, Isaac can shoot tears in advance at the shell to kill the fly immediately in case it should spawn.

Pay 1 coin for a chance at winning pills, bombs, hearts, keys, coins, flies, and the grand prize of the A Dollar item (99 coins). Bombs might be regular or the troll variety, flies might be neutral flies that do not attack or do damage to you in any way or the orbiting familiar, Pretty Fly. Winning a dollar will always cause the machine to explode. Occasionally, the machine will also explode when the prize is a pill or a few other small Pick-ups (bombs, keys, money, etc.).

* Can be a different pill.

In Wrath of the Lamb, the Fortune Telling Machine has a chance of replacing the Slot Machine. Fortune Telling machines can drop Tarot Cards, Soul Hearts, Trinkets or show a message (which has no effect at all). Its final drop is the Crystal Ball item. It can also be blown up to get a few pick-ups. Note: Both of these stations can be blown up and can drop bombs, coins, heart (soul and normal), random pills, tarot cards, trinket as well as occasionally a troll bomb. The drops/messages are not related to luck. However, the Lucky Foot does remove the "dud" fortunes, forcing the machine to drop something almost every single pull.

* Can be a different trinket. 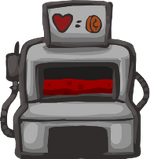 Converts 1 half-heart (or 1 full heart in the Womb and beyond) to 1-3 coins (these can spawn as pennies, nickels and/or dimes). May occasionally explode after a random number of donations and release a Blood Bag, an IV Bag (WoTL only) or just blow up. PHD and Lucky Foot increase the amount of money received to 2-4 coins. Blowing up this machine releases a random amount of money, half-hearts or full hearts.

"The Gamekid" - Enter 10 different Arcades. Does not have to be in a single playthrough.

"Mom's Bottle Of Pills" - Use the Blood Donation Machine 20 times. Does not have to be done in a single playthrough.