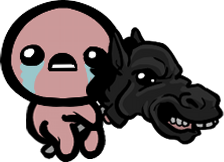 A Pony is an activated item.

A Pony is unique as an item as it gives passive effects as well as being an activated item. Upon pickup, Isaac's Speed will always be at least 1.5, he will get on a Pony, and gain Flight as long as he has the item.

Upon activation, Isaac will charge in the next direction he last moved.

The various states of ??? on A Pony. Notice the third position.